The process or procedure does exist and is appropriate, but it was not followed properly. For example:

“The purpose of problem management is to manage the lifecycle of all problems from first identification through further investigation, documentation and eventual removal. Problem management seeks to minimize the adverse impact of incidents and problems on the business that are caused by underlying errors within the IT Infrastructure, and to proactively prevent recurrence of incidents related to these errors. In order to achieve this, problem management seeks to get to the root cause of incidents, document and communicate known errors and initiate actions to improve or correct the situation.” – Quote from ITIL

Recurring Events & Incidents can represent more than 50% of the whole Incident amount. Therefore it is important to identify similar Incidents that might have the same root-cause, find that cause and remove it, so that the Incidents will not appear again.

The multiple Incidents can occur on more Config items … (we can search for a similarity of the symptoms e.g. via comparing the brief description of Incidents) 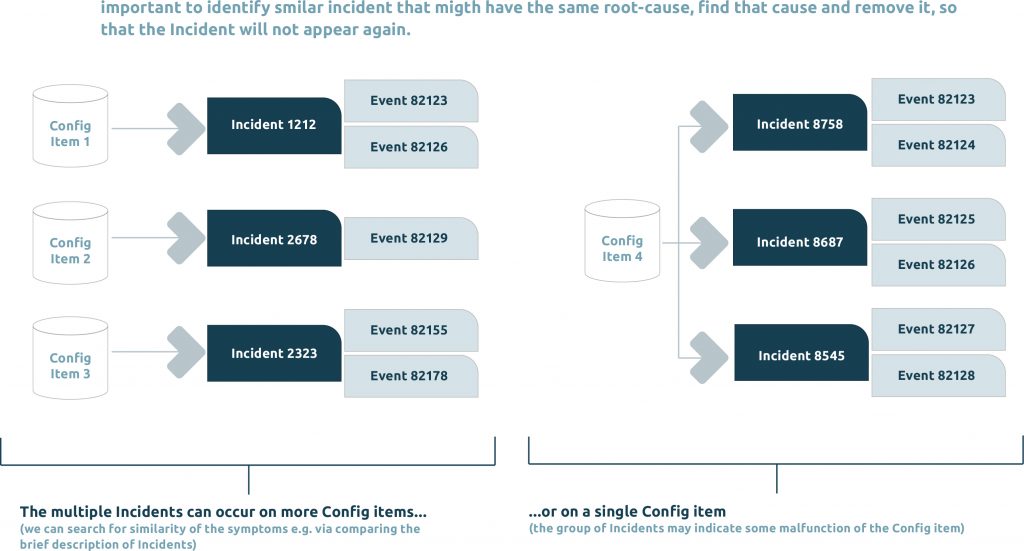 The review normally takes place after the last call, together with all technical and management key players of the related incident and is hosted by the MoD or LIM which managed the Incident. Basis for the MI review is the „Final Incident Report“, which needs to be shared for all participants.

Problems are prioritized by “low”, “medium”, “high” and “major/critical” using the same structure and matrix as in Incident Management.

For correct problem ticket prioritization, the following rules must apply:

The risk of incident reoccurrence must be evaluated within PRM.

If the risk of incident reoccurrence is not known, use the risk level ‘normal’. If it’s possible to make an estimation, use ‘critical’ for problems with a high risk that an incident may occur for the same or other related CIs. 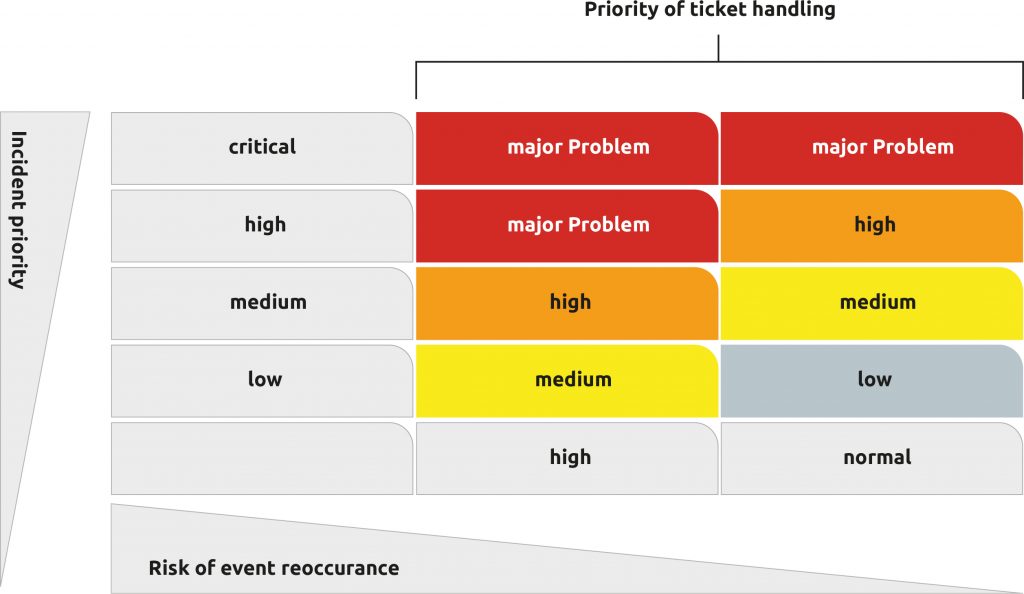 The following instructions are given as a guideline to find the right event risk level. For this you need at least the following information: 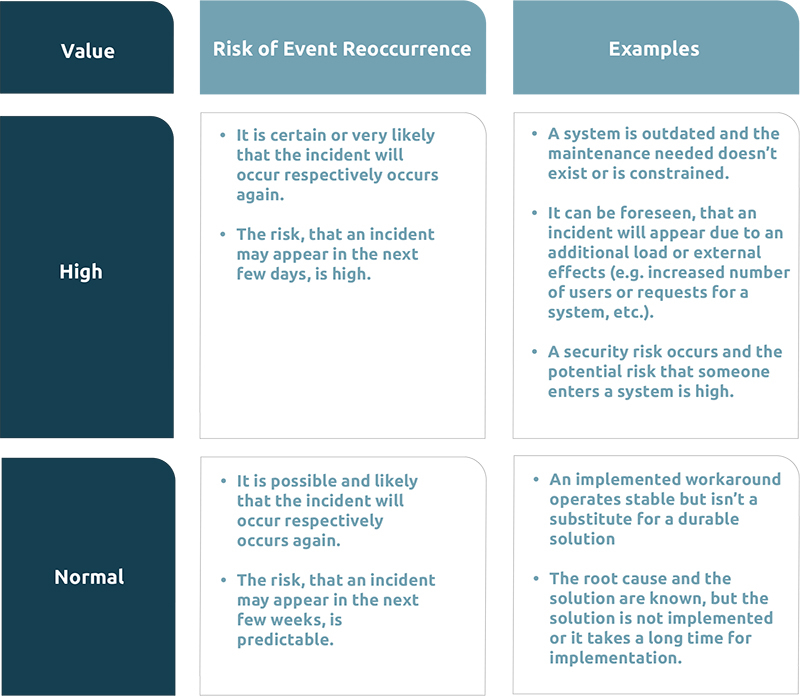 Major Problems require a Root Cause Analysis (RCA) to be presented in a report to senior management of the service provider. Our recommendation is to perform this in a weekly manner until there is no RCA outstanding. After the final RCA has been identified & accepted, a formal signoff is conducted.

During RCA investigation, the status is provided via a frequent report (2-5 times per week). It contains important and actual information about ongoing RCAs including: 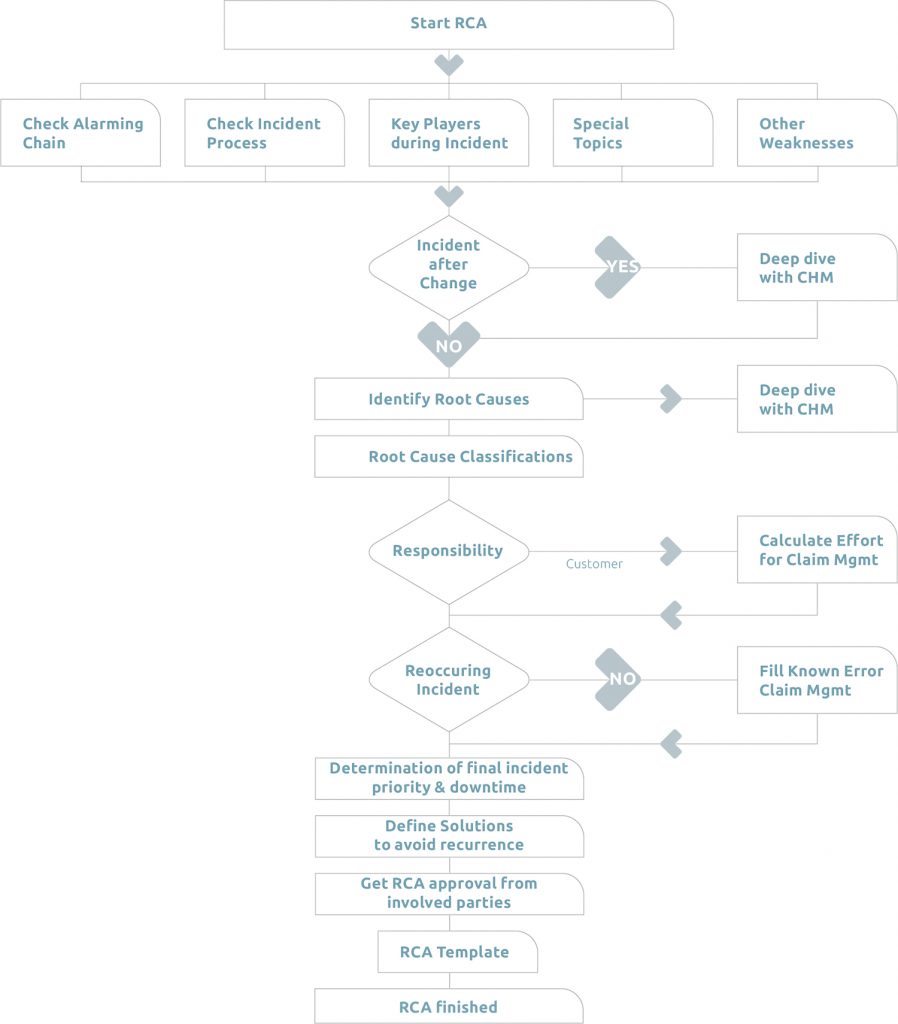 For example:
Human error issues, or lack of skill in a specific area → training measures
Issues with partners/third parties → set up an initiative with the partner
Recurring hardware issues → exchange a specific hardware component across the relevant installed base.
Process issues → adapt/change the process

Note: this diagram is a simplification. It is often difficult to assign a problem to a single root cause category. It is more often a combination of categories that contribute to a problem. From a zero-outage perspective, it is important to understand the interdependencies to ensure that the root causes are addressed. 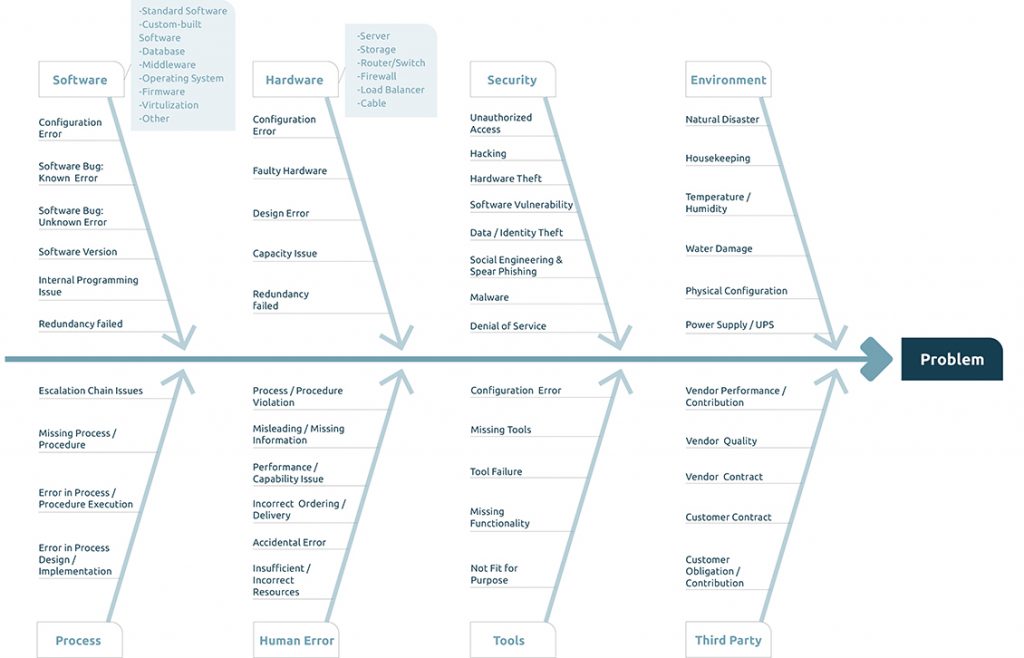 Diagram 1: Root Cause Categories (Click on each category for more detail)

Issues within the configuration of the software such as:

The problem occured due to a bug within the software or firmware and this bug is already listed within the known error database of the vendor and a patch or workaround is available and described. For example in the Oracle Technology Network or the Microsoft TechNet.

The problem occurred due to a bug within the software or firmware. This Bug is not known by the responsible vendor. Therefore no recommended patch and/or workaround is currently available.

Issue occurred due to the incorrect version of software, for example:

There is a problem within the software itself:

There is a redundancy option available for the application bit it didn’t work, for example:

During the implementation of the hardware, or during a change to the hardware, some settings were made which immediately, or at a later point in time, led to a failure or service restriction on the hardware or elsewhere in the environment.

A defect in a component or equipment, which may lead to a failure on this hardware. For example, a defective motherboard or line card on a server, storage device, router, etc.

This indicates that an overload situation has occurred as a result of a hardware failure or capacity growth failure. For example:

Following a failure of a component, failover to the backup device did not work for a number of reasons:

Unauthorized access to a system (see hacking) or to a building, a location or data center.

Attacks like “URL interpretation”, “Cross Site Scripting”, “SQL Injection” or “Buffer Overflow Attacks” are categorized here. The aim of these activities is to gain unauthorized access to websites, databases and systems.

Any kind of stolen hardware.

The Exploitation of flaws un architecture, implementation and configuration that make it possible to compromise the system integrity against the intended will of the User

In the context of the internet, identity is often reduced to identification- and authorization data; mainly combinations of username and password-, bank-, creditcard information and email-addresses. If someone is gaining unauthorized access to this data, the term “identity theft” is commonly used. But also any kind of valuable company data could be the target of theft to sell to competitors (customer data, product data, statistics).

With social engineering, the vulnerabilities of a person are exploited. Attackers mislead their victims to bypass security mechanisms or install malware unknowingly, to get hold of protected data and information. Unwanted emails are commonly called “SPAM”. The mails can be categorized into classical spam, malware spam an phishing-messages. With the last ones, the targeted user is lured onto malicious websites or is tricked into installing malware.

Housekeeping activities like vacuum cleaning or dusting can result in accidental unplugging or disturbance of sensitive equipment.

Physical interfaces can cause errors due to slack joints or slammed cabling.

Flooding due to broken water pipes or leaking cooling systems can cause damage to electrical components.

The escalation chain is the internal process describing how critical incidents are escalated internally.

Potential issues that may arise are:

The process or procedure does exist and is appropriate, but it was not followed properly. For example:

The required process or procedure was either partly or completely missing.

The process or procedure does exist, but it is flawed or is outdated, and its execution did not have the desired outcome.

An individual did not follow the defined process/procedure. For example, there may be a clear, defined procedure to re-boot a device, but the responsible individual chose not to follow the documented process, in order to complete the procedure more quickly. In cases like this the violation is usually intentional, but the consequences probably were not.

Incorrect information is delivered by a contributor (C) to the responsible person (R). For example:

An incorrect order was placed or the incorrect item was delivered. For example:

The responsible individuals were not able to complete all of their tasks properly. For example, one of two individuals on a shift is not available due to sickness, and there is no replacement on short notice, which means the remaining individual could be overloaded, and the four-eyes principle is not possible.

An unintentional mistake. There is no knowledge gap in this case. For example, the responsible person pushes the wrong button, or uses the wrong script by mistake.

A tool which supports the processes is incorrectly configured. For example, incorrectly setting a parameter setting for a monitoring tool leads to performance issues, as the tool itself then consumes too many resources.

There is no tool to support the necessary processes. For example:

The tool did not function according to its specifications, so the process could not be supported by the tool. For example:

An important functionality of a tool is missing, which can lead to longer resolution time. For example:

Tool Not Fit for Purpose

The tool was not able to support the process in the required manner. For example:

The performance or contribution of a vendor did not meet requirements. For example:

A quality issue in the product or service of the vendor was apparent. For example, a high percentage of a specific hardware component supplied by a single vendor becomes faulty after one year of use.

The contractual agreement with the vendor has weaknesses, or omissions. For example:

The contractual agreement with the customer has weaknesses, or omissions. For example:

Customer is contractually obliged to provide parts of the service or prerequisites, but did not fulfil this obligation, e.g. independent power circuits.